FACE’s Head Office is located in Brussels, seat of the EU Parliament and international decision making centre.   FACE also has a satellite office in Italy. FACE’s President, Secretary General, Marketing Coordinator and Administrative Coordinator operate from there.   Several National Coordinators, drawn from membership organisations, are located throughout the EU and abroad.   You can also find out more about the federation by contacting FACE members. 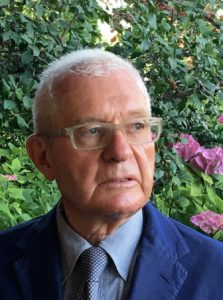 Mario Conserva has been active in the aluminium sector since 1963. He has worked for the Italian National Research Council, the Italian Experimental Institute of Light Metals (ISML), Alumix, Alnor and Alfin-Ediment. Mario was also a member of the Executive Board of European Aluminium Association (EA), President of the EA’s Alubuild Market Group and Extruders Division. He was equally President of the Italian Aluminium Association Centroal.   In addition to his role as Secretary General of FACE, Mario is the creator and President of the International Aluminium exhibition METEF, and the General Director of the International Magazine A&L Alluminio e Leghe. He sits on the board of Assomet, Centroal, IGQ and Aital. He has authored over 800 articles and technical reports on aluminium, is the co-author of two manuals on aluminium and holds international patents relative to the treatment and working of aluminium.

Roger-Philippe Bertozzi has more than 25 years of experience in European Affairs and, as negotiator, in multilateral diplomacy; and participated into several initiatives of the United Nations system. He has advised Arab Gulf States in negotiations of Free Trade Agreements, particularly with the European Union, and was the Delegate of the United Arab Emirates at the World Trade Organization. During his WTO mandate, Roger introduced raw materials into the Doha Round, coordinating this area of ​​the negotiation between 2003 and 2010. Very involved in the world of international conferences, Roger co-organised, inter alia, the first European research conference and exhibition, the first European summit on sovereign wealth funds and, with the United Nations, the first conference on the transition to the green economy of emerging powers. He has been an advisor of the Gulf aluminium industry and participated to the creation of the Federation of Aluminium Consumers in Europe ( FACE ) which today brings together European, Russian and Gulf players. Roger is FACE’s Head of EU and Multilateral Affairs. He actively took part in the negotiation, ratification and implementation process of the Paris Climate Agreement between 2015 and 2017 as advisor to the COP22 Presidency. Roger is also Vice-President of the EnergyPact